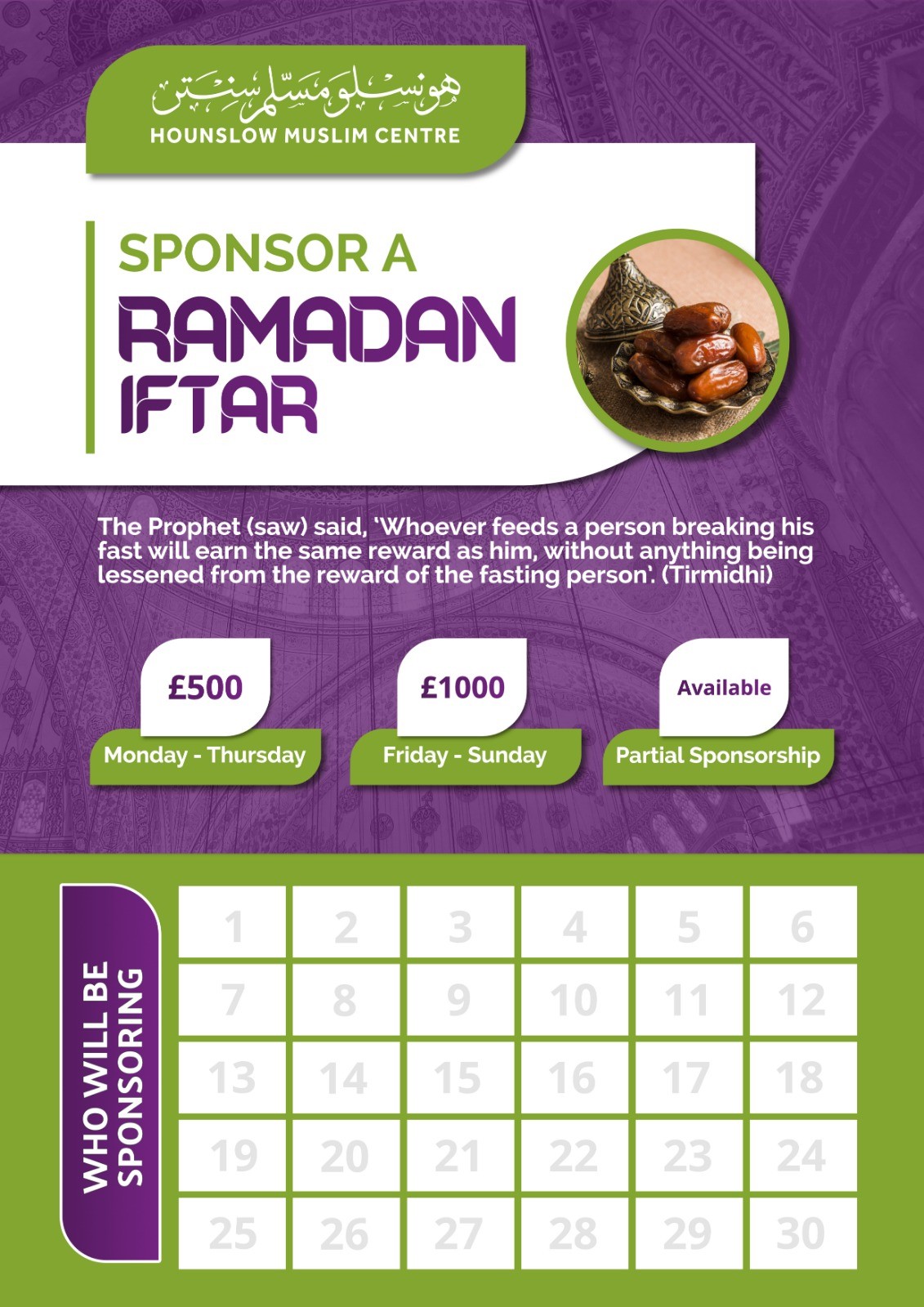 The Prophet (saw) said, ‘Whoever feeds a person breaking his fast will earn the same reward as him, without anything being lessened from the reward of the fasting person’. (Tirmidhi)

Ramadan is a month of communal worship, a time to take those who are lonely and into the congregation. At the heart of Hounslow Muslim centre is community spirit that we try to revive and build through our services and engagement with the community. We provide Iftar daily for users of the Masjid and pay more attention to the lonely and needy , especially those who have come from war torn countries and as refugees.

Saturdays we offer a community iftar where entire families come. Partake in one of the best actions that one can do in Ramadan and multiply your rewards. Either sponsor an entire Iftar or make a donations towards an iftar. 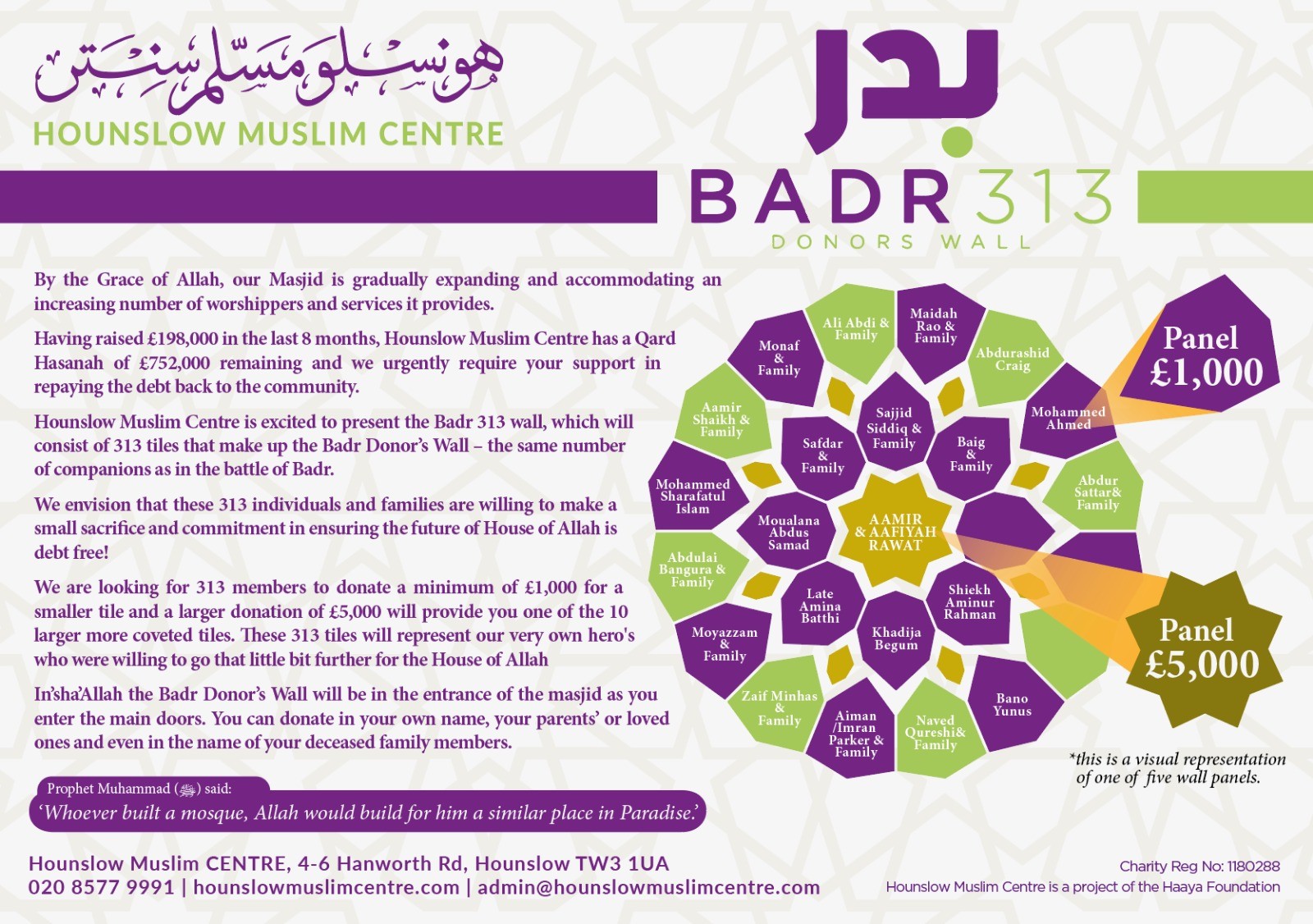 Hounslow Muslim Centre has a Qard Hasanah of £400,000 remaining and we urgently require your support in repaying the debt back to the community.

We have created a Donors Wall which will be visible to everyone as you enter the Masjid. This consists of 313 tiles - the same number of companions as in the Battle of Badr.

We are looking for 313 individuals, families, groups, businesses or organisations etc that are willing to add their names to the wall by donating a minimum of £1,000 for a smaller tile or a larger donation of £5,000 will provide you with one of the 10 larger more coveted tiles. These 313 tiles will represent our very own heroes who were willing to go that little bit further for the House of Allah.

The blessed month of Ramadhan is upon us, a month in which Allah ta alaa's mercy is overwhelming towards his creation. It's an opportunity for us to attain salvation and entry to paradise. It is a month where good deeds are increased and the reward for doing good is multiplied up to 70 times. Amongst the places that are MOST beloved to Allah ta alaa are the houses of Allah , the Mosques and those who build them, serve them, support them have a guarantee from the prophet sallalahu alayhi wa alihi wasalam for a house in Paradise in return.

We are launching a campaign this Ramadhan to pay off our Qarde Hasana, where we are looking for 500 generous people to donate either for reward of deceased loved ones, for barakah in the home and family , a sadaqah of £250 per family. Allah ta alaa reward you abundantely.

The Masjid still has a DEBT (Qarde Hasana) of £400,000 to clear. Please help make the house of Allah ta alaa debt free by donating generously in this month of generosity. Donate either in your name, or in the name of your loved deceased ones. "Who is it that would loan (spend in his way) Allah ta alaa a goodly loan so He may multiply it for him many times over? And it is Allah ta alaa who withholds and grants abundance, and to Him you will return" Surah Al-Baqara (245). The Prophet sallalahu alayhi wa alihi wasalam said, “Whoever builds for Allah ta alaa a mosque, seeking by it Allah ta alaas grace, Allah ta alaa will build for him a house in paradise.” (Bukhari and Muslim)

In yet another narration, the size of this mosque is clarified, “Whoever builds for Allah ta alaa a mosque, even if it be tiny, like a bird’s nest, Allah ta alaa will build for him a house in paradise.” (Ibn Hibban)

Donate from just £5 per Month Setup a direct Debit today by simply filling in the form. Alternatively, you can go to your bank and setup a direct debit today using the details provided in the Offline Donation section.

History of Islam & the West 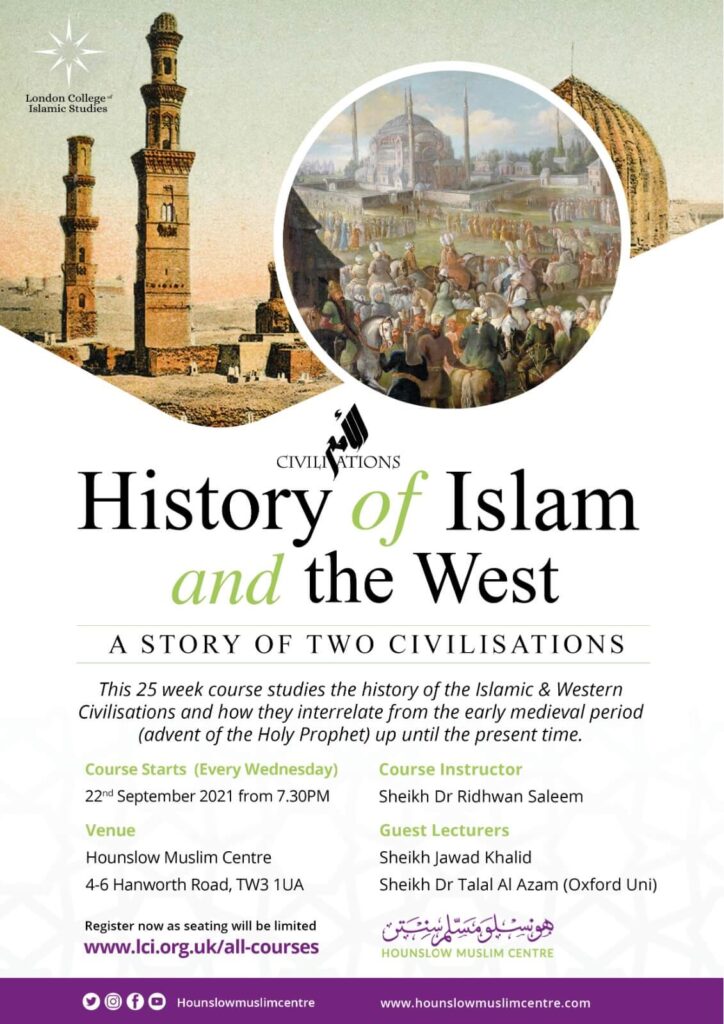 Register to this course

History of Islam & the West

A Story of Two Civilisations

The Civilisations History Initiative is based on presenting the intertwined history of the Islamicate and Western civilisations, from their inception in the Early Middle Ages up to the present time.

We aim to highlight the rich heritage that links both great civilisations throughout their history, as well as to debunk many of the myths and misconceptions that have arisen over the centuries, and to provide an alternative to the prevailing Eurocentric telling of history.

The main project of the Initiative has been the popular Civilisations History Course – A Story of Two Civilisations – a 12-month course which has run in Hounslow (2016-17), High Wycombe (2017-18), and Woking (2018-19). Read past student testimonials.

The course focuses on a broad sweep of the major historical personalities, events and processes of the Islamic (622-1707) and European (1707-present) Ages. The Islamic Age, or Islamic Millennium, is further divided into 3 major periods: (1) the High Caliphate Period (622-1066), in which most of the Muslim world is united under one caliph who commands the greatest empire in the world; (2) the Middle Period (1066-1500) of Islamic sultanates, emirates and khanates, in which myriad polities and dynasties come and go but which form the “Muslim Commonwealth” united by a common language, religion and culture; and (3) the Gunpowder Period (1500-1707), dominated by the emergence three great empires in the Muslim world, the Ottoman, Mughal and Safavid, which continue Muslim global pre-eminence, while Western Europe is undergoing its Renaissance, Reformation and Age of Discovery.

The final period, the European Age, (1707- present), witnesses the gradual rise of the European colonial empires which come to dominate most of the world by the end of the nineteenth century. Following the momentous and self-destructive power struggles between these colonial powers in the 20th century – the two World Wars – the mantle of Western civilization is taken on by the new world superpower, the United States of America, which proceeds to fashion a new global order under its direction.

The passage of ages, empires, dynasties and the later emergence of nation-states will be studied in relation to the world situation as a whole, and with particular regard to three inter-related aspects: political-military, intellectual and the economic.

A project of Ha Meem Foundation

Registration is required to attend this course. Due to limited capacity at the venue we recommend to register now to avoid disappointment. This year, we have waived the course fee, and invite you to Pay What You Want for this course.

Students who successfully complete the course will receive a Diploma in Medieval and Modern History.

Register to this course